TL;DR: I bought a DDR arcade about a month ago, and two days later I hurt my foot and I haven’t been able to play ever since.

Update 2020-01-26:: I visited the physiotherapist two days ago and got the all clear. This doesn’t seem to mean everything is good though, as some movements I did later that day made my foot hurt a lot yesterday, but today it feels good again. At least I can play DDR now!

Getting a DDR cabinet

One of the perks with having a house is that it is large, meaning we have space for a dedicated library and a dedicated video game room. One of my dreams ever since I started playing DDR in 2003 has been to own my own arcade - and now I do!

Through some friends I found out there was a dude in Stockholm selling two DS Supernova cabinets, so a friend and me bought one each. Now, these cabinets are rather large, and extremely heavy, so transporting them is a bit of a hassle. I ended up renting a small truck, driving to Stockholm (I got my parents as company on the way), via Växjö (where my friend lives) and back to Gothenburg. It took almost two full days, plus when we were done the cabinet was in my garage, not in the house.

Fortunately, both the pads and cabinet have wheels and handles, plus the pads were on pallets when we moved them. 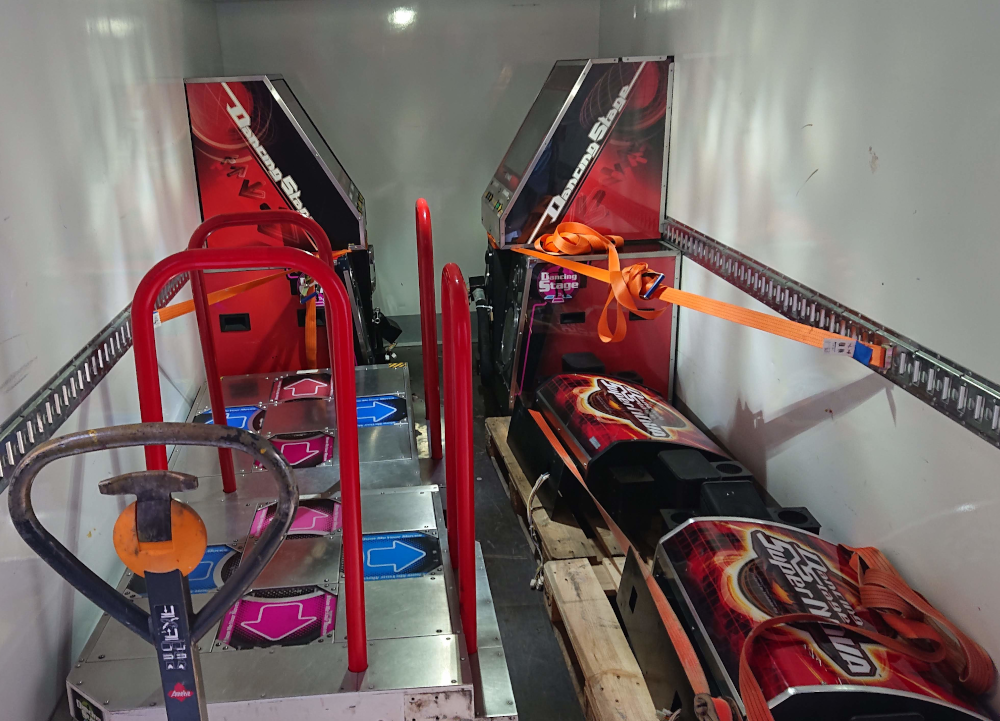 Getting the cab into the house

Getting the pads down into the basement should not be hard, after all, the bar can be removed. The top piece is small and comparatively light so it is also easy to get into anywhere. The big (and heavy) problem is the cabinet itself. It is ~75cm wide if moved sideways (the picture above shows them from the side), and much larger in any other direction. To get the machine down to the basement involves, as the location implies, getting it down some stairs. Our inside stairs to the upper floor would have been perfect, they are wide and there is lots of space around it. Unfortunately, we were going downstairs, and the stairs down there are 73cm wide in its widest place. Damn!

A second option was to move it down the basement entrance stairs, but those were also too narrow, plus the sides are uneven due to them being masoned with large stones. But there was a third option, to remove the fence around the basement entrance, and slide the cabinet down to the entrance. The fence was reasonably easy to move in one piece. We bought two thick boards to slide it on, but getting the cab to the sliding position involved moving across the lawn, with a 200+ kg cabinet with rather small wheels (they work fine indoors). Being three people, we could lift it in short bursts of 15-ish cm at a time until it was properly aligned.

The picture below shows everything before we started messing with it. We had to remove the fence, the rain cover, and the door, to get the cabinet in.

Getting the cabinet onto the planks and sliding down was not trivial, as the planks would flip up from the weight. We put the straps we used in the truck around the cabinet and had two of us slowly sliding it down once we got it over the tipping point, and my younger brother would coordinate and fit it through the doorway.

Some days later, we were putting the rain cover and fence back. The rain cover was not difficult, but the fence was very precisely fit when it was built, so it didn’t quite snap into place for the bolts to fit. In a moment of unwarranted confidence I thought I could kick the fence really hard at the turn (it’s L-shaped) to make it jump into place. It did not work.

Kicking the fence had one effect though, my foot has been sore and I’ve visited physiotherapy a whole bunch of times, got my foot x-rayed (nothing broken), and as a result I have been able to play on my DDR machine only once since I got it (like a test run the day after we got it down). The irony of this is not lost on me.